In March of 2020, the Texas State Guard (State Defense Force) was activated to assist in the response to the Covid-19 Pandemic sweeping through the state. Among the hundreds that were activated was Lt. Col. Margaret Vaughan, who had the enormous and vital task of coordinating with other military branches and dozens of Local, State and Federal agencies. She had the unique mission of working with these other organizations to develop a central pandemic-focused State Operations Center (SOC). Lt. Col. Vaughan spent 14 months on State Active Duty working and coordinating with multiple organizations and agencies in allocating resources to priority areas. The following article discusses her time on Active Duty during the Covid Pandemic: 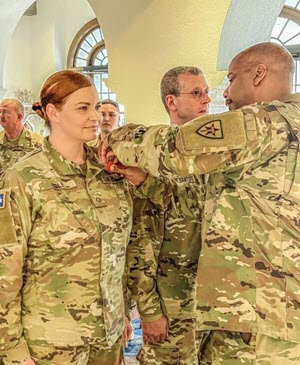 It is the longest mission deployment in the 80-plus-year history of the Texas State Guard. And despite its critical, life-saving role, it may be one of the least well-known or understood.

Margaret Vaughan of Bronson, Texas, a Lt. Col. in the Texas State Guard, remembers the moment it started. It was March 17th, 2020. Covid-19 cases across the US had jumped past the 4,000 mark.  Vaughan, a cattle rancher by trade, had been preparing for this moment for years: a long-duration deployment of Texas State Guard Forces not quite like any other before.  On that day, the request came in for Vaughan to prepare for the coordination of statewide military assets in the fight against Covid-19.  This would be a multi-front battle against a deadly and largely unknown viral adversary.

“We had to determine the base of operation, the mode of operation, what our tactics would be…,” Vaughan says.  As Texas State Guard Engineer Units deployed to sites across the state to evaluate possible hospital overflow locations to treat the sick, Vaughan went into action coordinating with the Texas Department of Emergency Management, the Department of State Health Services, Texas Task Force One, specialists within the Texas Military Department (which includes the Texas State Guard, the Texas Army National Guard, and the Texas Air National Guard) and other state agencies to structure a central hub: a pandemic-focused State Operations Center (SOC).

Over the years, the Texas State Guard has been involved in hundreds of deployments of highly-trained mission-ready military forces in support of civil authorities during weather events like hurricanes and tornadoes, conducting search and rescue missions on land and water, setting up shelters, medical triage units, and more.  But “this would be a novel mission for the Texas Military Department,” Vaughan says.

Novel, certainly. But a mission the Texas State Guard was prepared for.

Years earlier, Vaughan and her team conducted an incident exercise for a hypothetical statewide emergency, operating from a ballroom in a downtown Austin hotel.  Now that the statewide emergency was real, Vaughan set up shop in the same ballroom, managing a remote SOC for Covid response.  Up went tables and large screen monitors to track the spread of Covid and manage incoming requests for assistance statewide.  Specialists in logistics took up positions, dispatching resources like PPE (personal protective equipment) to needed hospitals, nursing homes, and other facilities. Troops and assets were tracked and deployed from the military desk in the SOC by highly-trained Texas State Guard specialists including Cpl. Christie Cole from Houston.

Cole has been serving five-days-on/two-days-off in the SOC for 14 months in a variety of positions.  The SOC is her sixth deployment since joining the Texas State Guard in 2019.

“The SOC has been my home away from home,” Cole says. An office assistant in Tomball and a part-time college student, Cole says the experience working in the SOC has been deeply rewarding on many levels.

“I come from a military family.  I grew up seeing people in uniform, and I’ve always had the mind that you serve others before yourself,” Cole says.  But Cole isn’t unmindful of the benefits that come with her service: her training in the Texas State Guard is being applied as college credit as she works toward her AAS degree at Kilgore College.

“You can benefit from serving your state and serving others,” Cole adds. “I don’t think enough people in Texas know about the benefits of being a member of the Texas State Guard.”

Benefits of Guard membership include college credit, tuition assistance, a daily stipend when called to State Active Duty, job protections when called to duty, a free ‘Super Combo’ hunting and fishing license, and, perhaps more importantly, the pride and satisfaction that comes from serving fellow Texans while wearing the uniform of the most highly regarded State Guard force in the United States.

During a recent visit to the SOC by the Acting Commanding General of the Texas State Guard, Brig. Gen. Anthony Woods presented Cole with the Commanding General’s Individual Award in commendation for her service.

Also receiving the award during Woods’ visit was 1st Brigade Staff Sgt. Kevin Dos Santos of Forney, who has been serving in the SOC for more than 2 and a half years. During that time, Dos Santos has served in almost every role in the SOC, from taking in STAR requests (requests for assistance from state and local officials), to logistics, security, tracking assets, providing status updates from health care workers, and much more.

“During the first year of Covid, I was responsible for working with hospitals across the state–finding out how many patients they had, what supplies and equipment were needed…” Dos Santos says. “Early on, the hospitals couldn’t have extra, but they had so many patients, I knew that if we couldn’t get the supplies to them, people might die.  The urgency of people waiting on that equipment was hugely challenging.”

Receiving the Commanding General’s Individual Award took Dos Santos by surprise. “I was just doing my job, I didn’t expect anything that special. For someone like General Woods to show that he appreciates my work–it just meant the world to me.”

Like many who serve in the Texas State Guard, Dos Santos is quick to credit his spouse, Edna, for supporting his service to Texas (“she gives me the freedom to serve and says ‘keep going’!”), and just as quick to acknowledge his colleagues.  “The greatest thing is the leadership here—the best of the best. We work a lot of long hours, and it’s ‘team always, mission first’. That’s one of the most precious lessons I’ve learned here: you’ve gotta take care of your team.”

Dos Santos says he expects to stay on at SOC until the work is done. And now, with new Covid variants surfacing and surging, what was already the Texas State Guard’s longest mission on record is getting even longer.  Current orders in the SOC have been extended through August: two months past the planned mission end date.  The mission could be extended further.

“I’ll be here ‘til the end,” Dos Santos says, a smile in his voice.

The SOC’s range of operations underscores the ongoing need for service members with experience in law enforcement, logistics, health sciences, information technologies, and more.  Prior military service is not a requirement for membership in the Texas State Guard, but continuing training, compliance with military standards, and a spirit of public service are essential.

More information about the Texas State Guard, including opportunities and recruitment contacts, can be found online at tmd.texas.gov.

View all posts by Administrator

StateDefenseForce.com is a department of the State Guard & Defense Force Council.