The Texas State Guard recently held a worst case scenario exercise in a fictionally created town named San Patrick, Texas. This fictional town of 149,000 residents was designed to experience a massive drought, similar to events currently occurring throughout multiple states in the United States. The situation presented was of an immediate emergency water shortage that threatened the usage of water for all residents, livestock and crops.

The exercise focused on the speed of quickly deploying troops to the region. It tested the mobilization, logistical and administrative capabilities of the Texas State Guard, as well as other participating agencies.

This training exercise was designed and executed by Lt. Col. Anthony Dale who is part of the Command and General Staff College program, as well as members from the Texas Emergency Operations Center (TEOC).

Lt. Col. Anthony Dale developed a training program that incorporates today’s most current emergency practices and standards so that Texas State Guard service members are ready to deploy if called on by civil authorities.
“After successfully navigating the evolving constructs of this disaster scenario through applying practices and resources gleaned through this training, participating Texas State Guard soldiers will be better prepared than ever to respond to real-life emergencies within their state.”

Here is the article: 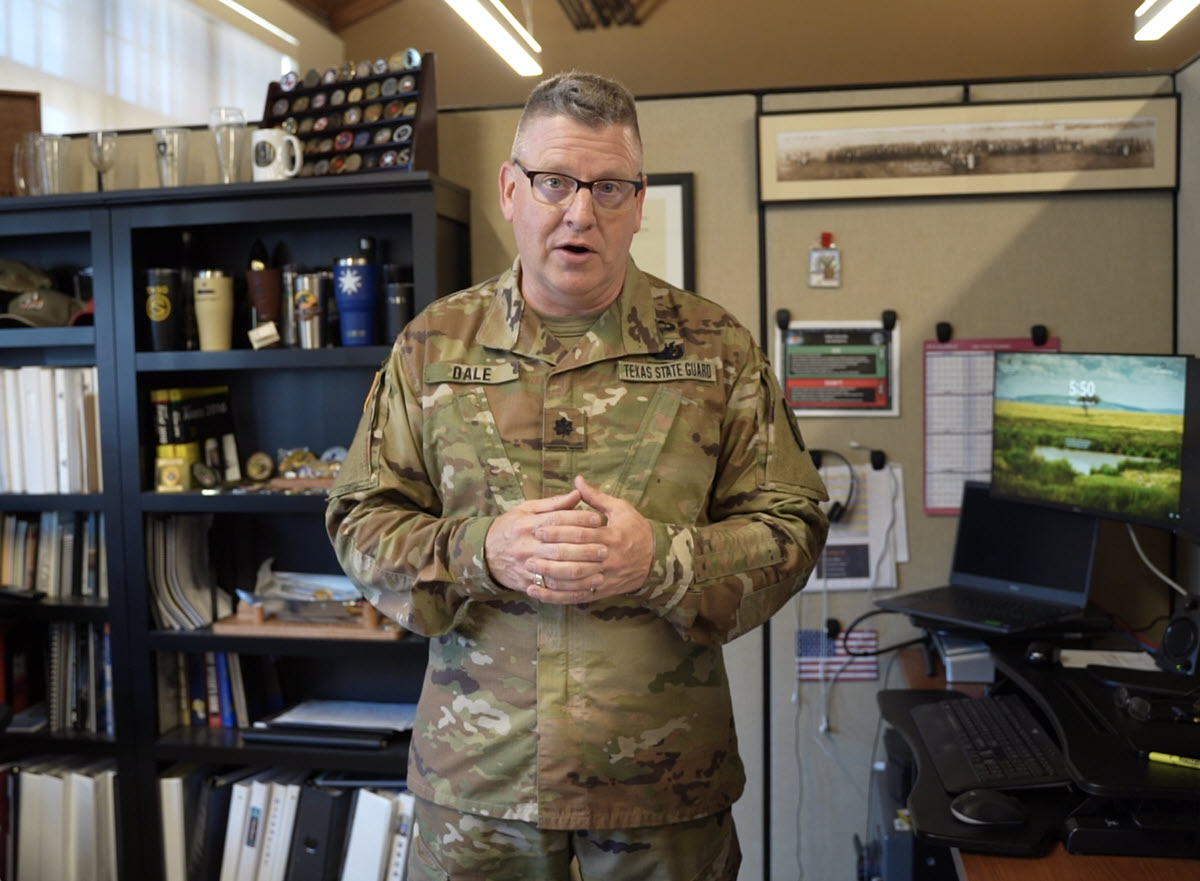 AUSTIN (Camp Mabry), Texas – In the small coastal Texas town of San Patrick, local farmers fretted as the worst possible conditions came to bear.  With drought and heat conditions reaching 2011 records, the failure of the city’s water treatment plant- the sole municipal water source for all 149,000 inhabitants- threatened the worst crop and livestock losses of the decade. San Patrick citizens faced an immediate emergency water shortage advisory and a ban on all non-essential outdoor water use.

Only…there is no such place as San Patrick, Texas.

Its inhabitants and the water treatment plant failure were all part of a hypothetical- contrived as a training simulation for disaster response, under the direction of Texas State Guard Lt. Col. Tony Dale, in coordination with seasoned Texas Emergency Operations Center (TEOC) battle staff.

Even better news? After successfully navigating the evolving constructs of this disaster scenario through applying practices and resources gleaned through this training, participating Texas State Guard soldiers will be better prepared than ever to respond to real-life emergencies within their state.

According to Dale, this objective was a main goal in developing the TEOC awareness course, a project Dale designed to satisfy a requirement in his own professional military education as a student in the Command and General Staff College program.  “I easily spent 30 hours in the development of this training as a potential qualifier for service members to work in the TEOC, but also to act as a refresher for my own civil affairs staff. While we have all served within the TEOC, it’s important that our training incorporate today’s most current emergency practices and standards so that we are ready to deploy if called on by civil authorities,” Dale said.

Dale’s comments are reflective of the ever-expanding and adaptive role of the Texas State Guard, which is often called upon to help civilian officials respond to critical situations.  The Texas State Guard is one of three branches of the Texas Military Department, which also includes the Texas Army National Guard and the Texas Air National Guard.  All three state forces fall under the command of the state Adjutant General and the Governor as Commander-in-Chief.

It is not unusual for Texas State Guard service members to take leave from civilian jobs to deploy for a period of 3 days to 2 weeks in response to hurricanes or other natural disasters.  But many are now serving in support of activities such as border security for much longer periods, and within more varied positions of service and leadership than ever before. Dale acknowledges that from his perspective, as mission requirements have become more encompassing, training needs have also grown to be a greater priority.

“For this reason, in developing the course exercise, I worked closely with T-3 (Operations Team) as well as with experienced members of the TEOC.  I wanted to ensure that all (variables in) the simulated emergency were realistic and that they elicited responses according to current state emergency operation practices,” Dale said.   /p> In addition to receiving preliminary two-hour training from the TEOC on WEBEOC (a web-enabled crisis information management system that provides real-time information sharing and situational awareness), participants also received training on current PERSTAT (personnel accountability and compensation) forms from the TEOC’s Administrative leader, Texas State Guard Sgt. 1st Class John Saxon. Saxon, a combat Army veteran, joined the State Guard in 2017 and has served within various billets, including five years as an administrative officer handling all aspects of personnel management.

“Taking care of the troops is priority one,” said Saxon. “One of our main responsibilities within the TEOC is to manage the deployment of service members from home of record to mission, which includes overseeing logistical and administrative tasks involved in troop movement, so training on proper practices and forms becomes very important to ensure safety, accountability, and well-being of our service members,” he said.

After receiving training from Saxon, participants engaged in a 7-hour role play incorporating the formation of the STAR (State of Texas Assistance Request) initiated by the mayor of the fictitious town of San Patrick.  This was followed by the (mock) mobilization and deployment of Texas State Guard assets, among other state resources, by the State Operations Center (SOC), located at the Department of Public Safety Headquarters in Austin, and managed by the Texas Division of Emergency Management.  Dale’s training scenario provides a stress test for the systems in place, highlighting potential vulnerabilities, and preparing soldiers to take on real-world missions quickly and effectively.

Staff Sgt. Jason Zachman, the current non-commissioned officer in charge of the TEOC, makes sure all the moving pieces work together to make a rapid Texas State Guard response possible. “The SOC serves as the first warning point and primary control facility- and will operate, as needed, on a 24/7 basis to monitor threats, make notification of threats and provide information on emergency incidents to local, state, and federal officials,” Zachman said. Zachman worked as a member of the Special Operations Center (SOC) team before transitioning to TEOC.
Zachman is one of a few TXSG service members who has been deployed on state active duty for a period of over two years.  “The learning, exposure, and growth of my positions have been unparalleled,” he said. “Now that I’ve served in the TXSG, I can’t imagine doing anything else that would feel as purposeful as serving my fellow Texans.”

Like many Texas State Guard soldiers, Zachman is an Army veteran. With his experience as a former military policeman and volunteer fireman, Zachman possesses a uniquely strong skill set in emergency management.  Although Guard members do not have to have prior federal military experience to join, the Guard is always looking for potential recruits with real-world experience in a variety of fields including engineering and construction, medicine, education, information technology, first responders, and other vocations.

“The readiness of our troops is paramount for executing the missions of the TXSG,” said Brig. Gen. Anthony Woods, Commanding General of the Texas State Guard. “When the Governor of Texas activates our forces in times of need for our fellow Texans, our consistent training prepares us to answer the call. I’m proud of the men and women of the TXSG for their commitment to train and deploy when needed.”

More information about the Texas State Guard, opportunities to serve, benefits, and recruitment contacts can be found online at tmd.texas.gov/state-guard.

View all posts by Administrator

StateDefenseForce.com is a department of the State Guard & Defense Force Council.